Summary: Both the main and alternate Elliott wave counts expect the low of June 22, 2021, to not be breached.

The main Elliott wave count expects a huge triangle to continue sideways for a few months before the next bull run begins. 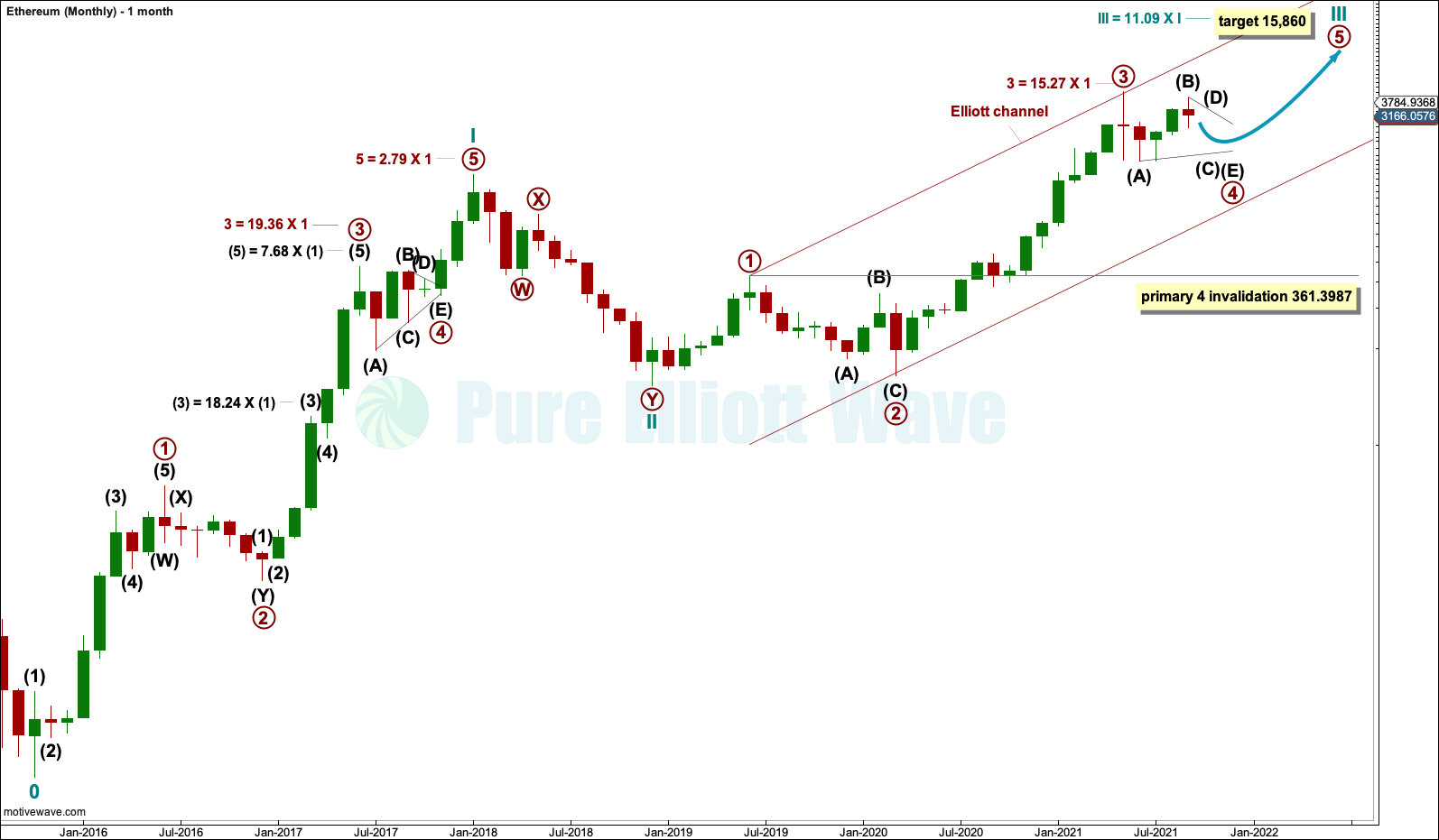 The monthly chart looks at the entire price history of Ethereum. The Elliott wave count begins at the low of October 2015.

From October 2015 to December 2017 this upwards wave subdivides perfectly as an Elliott wave impulse, labelled cycle wave I. The impulse lasted just over two years, which is within the expected duration for a cycle degree wave, so confidence that this labelling is correct may be had.

Within cycle wave III, if primary wave 3 was over at the last high, then it exhibits a normal length to primary wave 1. It is for this reason mainly that the main wave count below labels primary wave 3 complete.

Cycle wave III may only subdivide as an impulse. It must move far enough above the end of cycle wave I to allow room for cycle wave IV to unfold and remain above cycle wave I price territory. 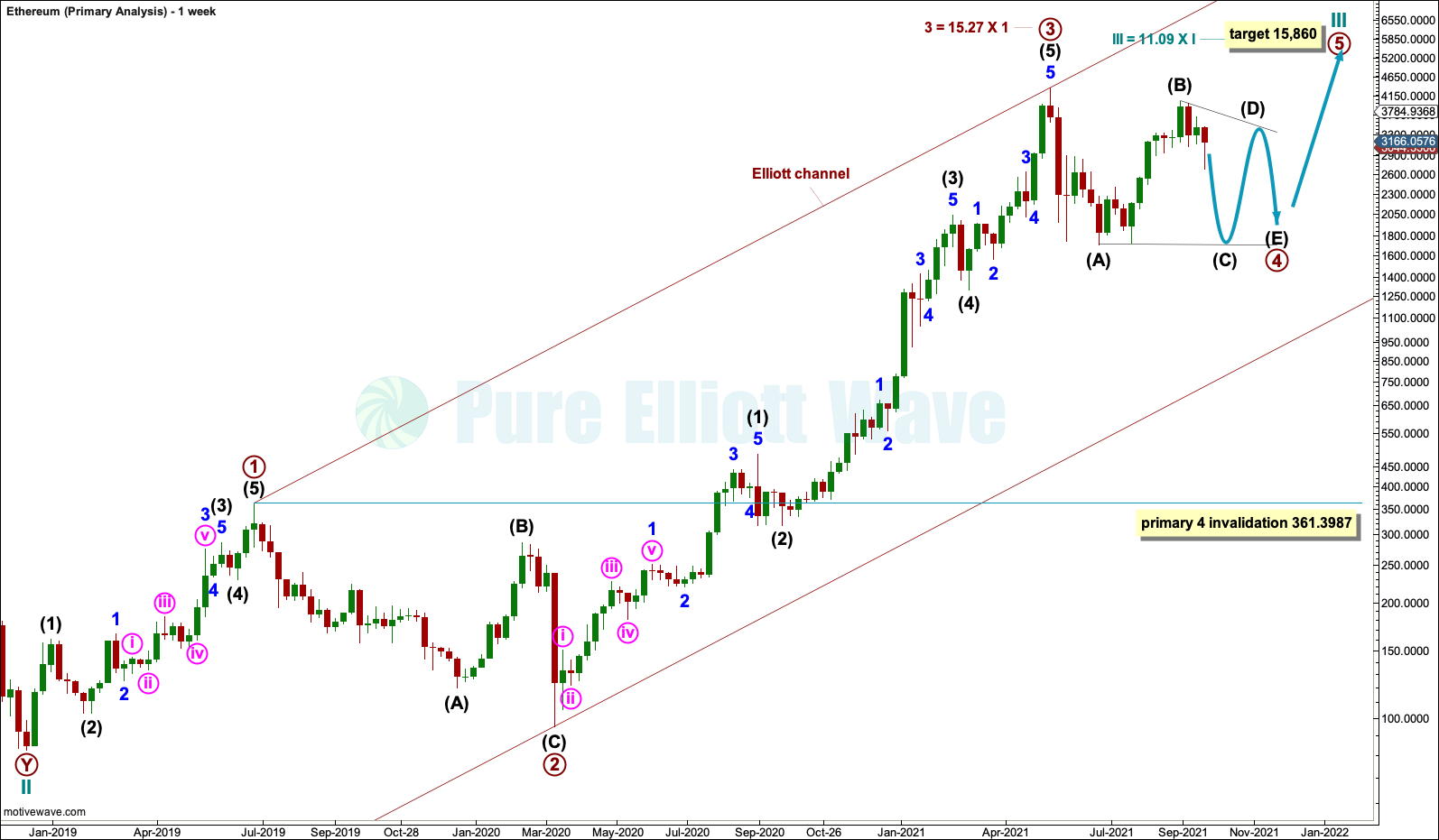 Within the impulse of cycle wave III: Primary waves 1, 2 and 3 may be complete and primary wave 4 may continue sideways as a large triangle for a few more months. 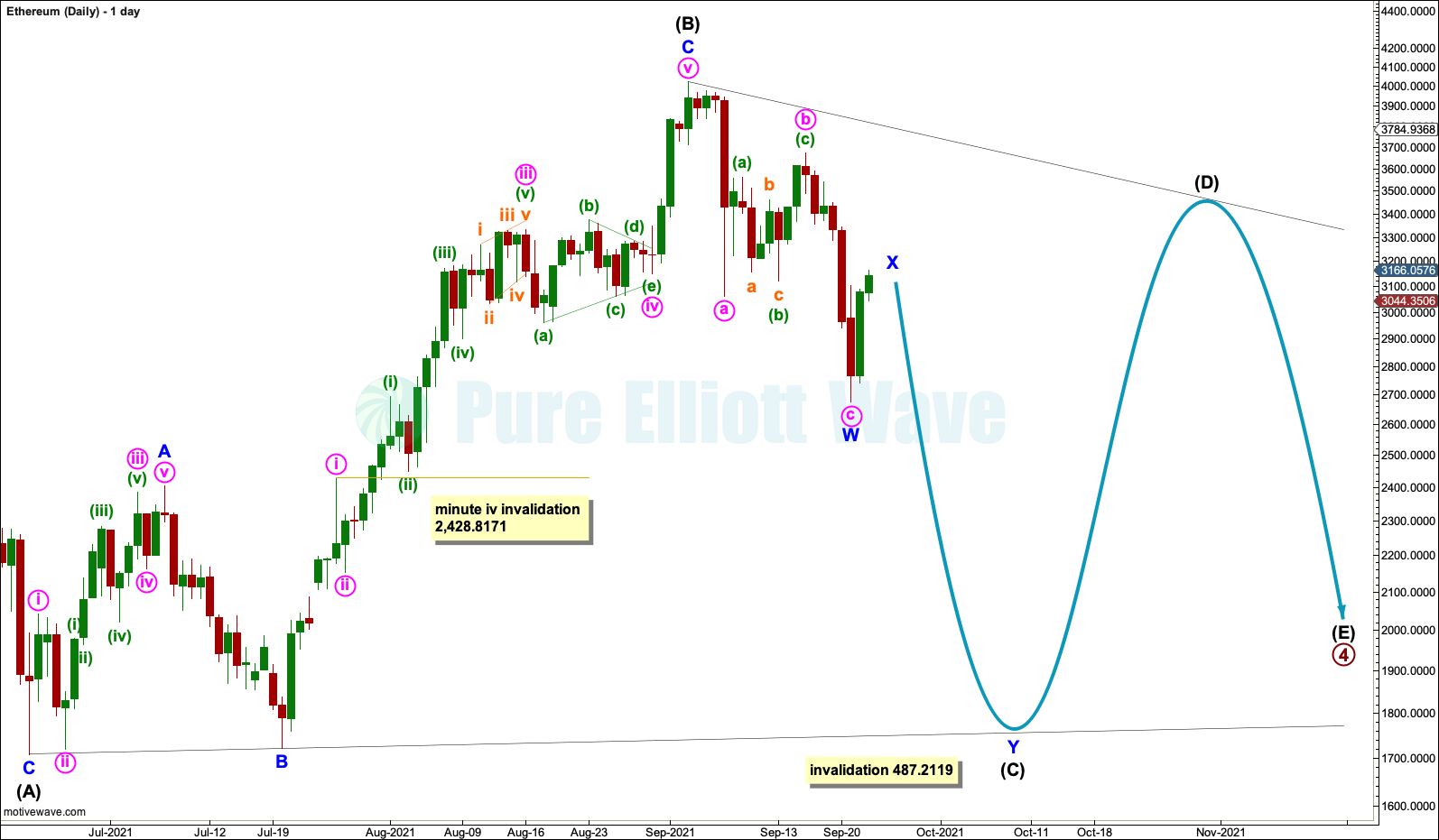 Intermediate waves (A) and (B) within the large triangle for primary wave 4 may be complete, both subdividing as single zigzags. 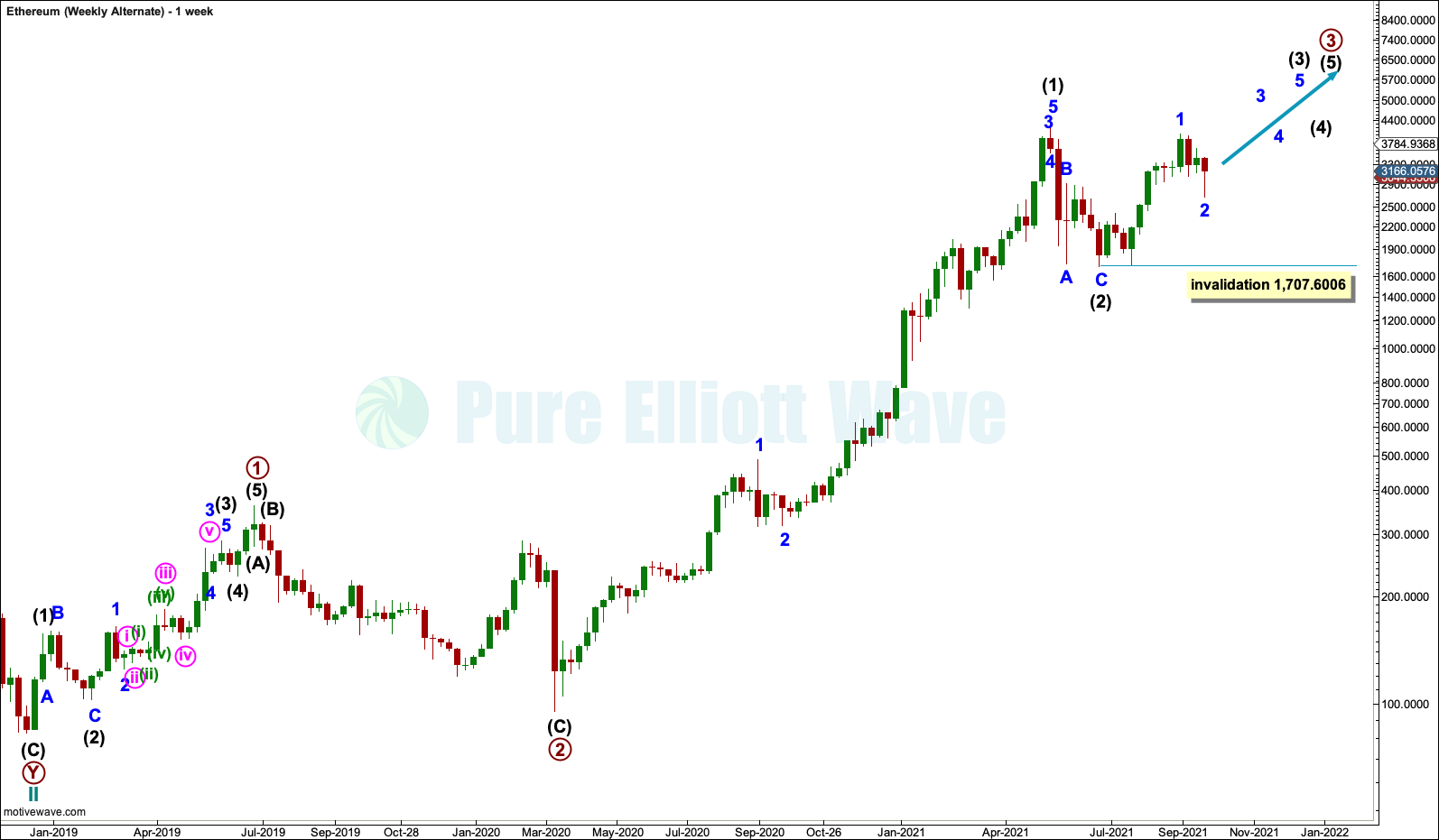 This wave count is judged to have a close to even probability with the main Elliott wave count. It is an alternate only because the length of primary wave 3 for the main wave count is within a normal expectation based upon the price history of Ethereum. 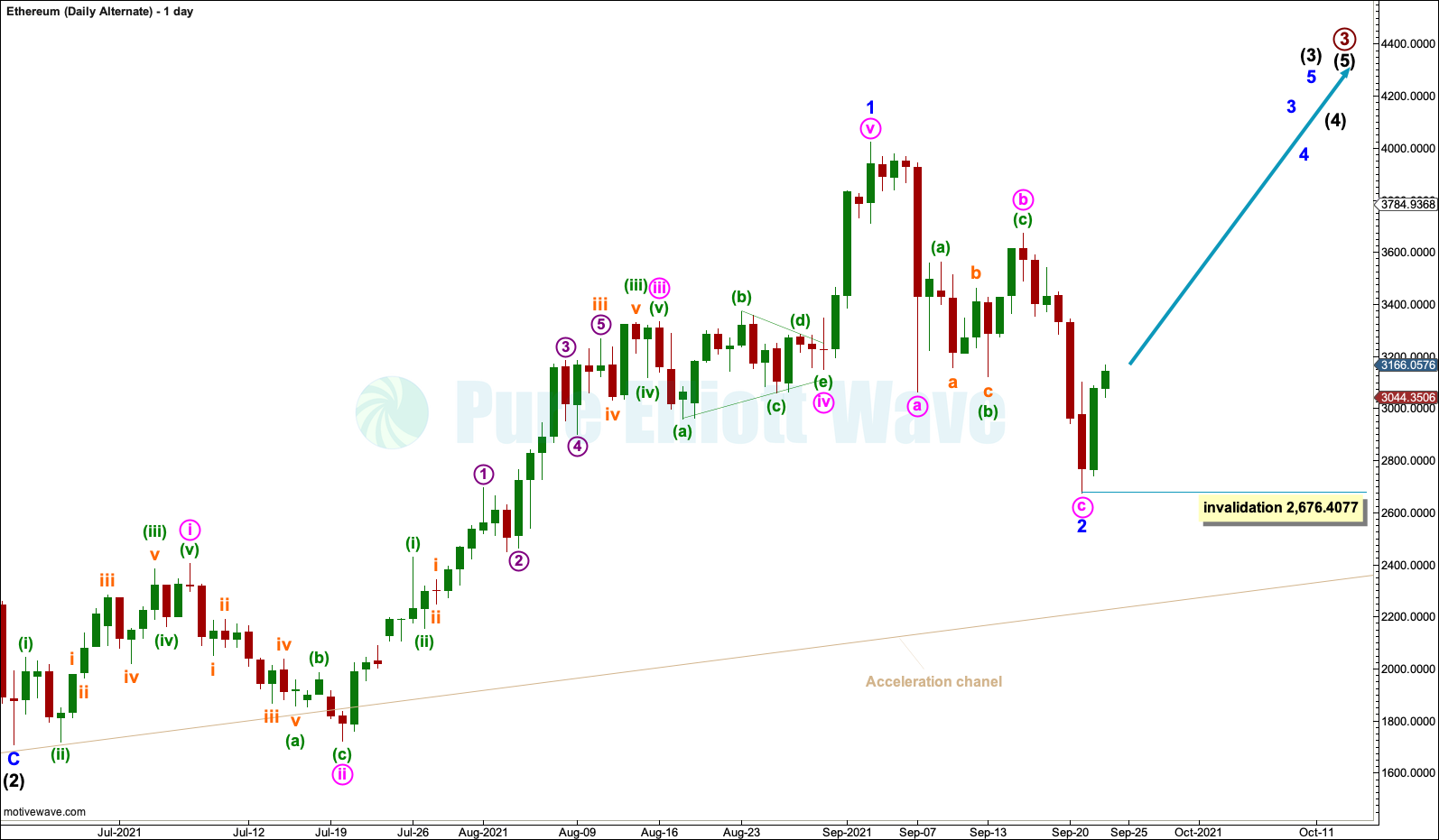 Minor wave 2 may now be a complete zigzag. Within minor wave 2, minute wave c is 36.6565 longer than equality in length to minute wave a. This difference is only 3.7% the length of minute wave c. I consider a variation less than 10% to be small enough to judge the wave lengths to exhibit a Fibonacci ratio.

This alternate is a very bullish wave count. It expects now that minor wave 3 within intermediate wave (3) within primary wave 3 within cycle wave III has just begun.

Within minor wave 3, no second wave correction may move beyond its start below 2,676.4077. 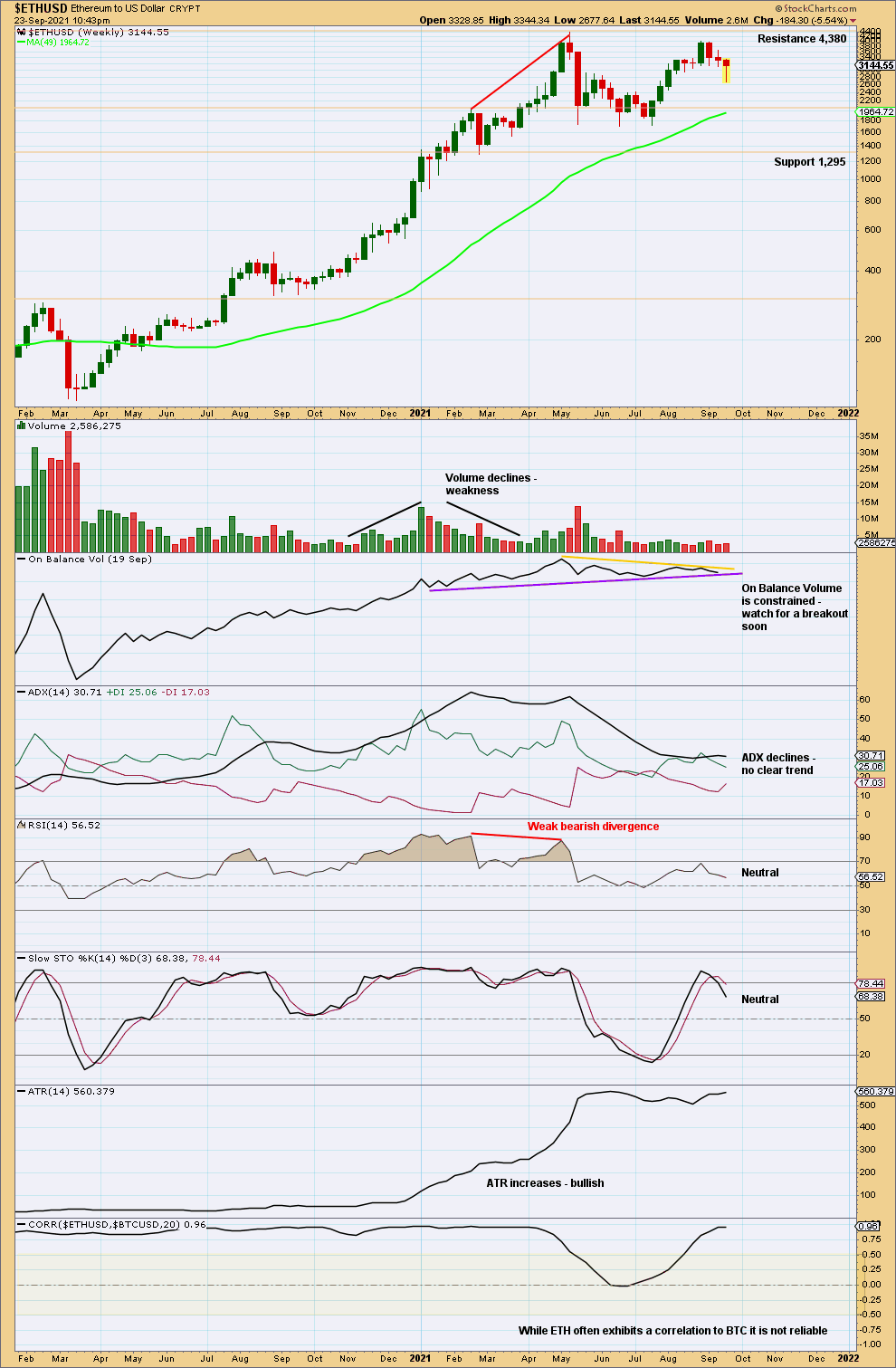 At the last major high, RSI reached deeply overbought and then exhibited bearish divergence, and ADX reached very extreme. The pullback may have relieved these extreme conditions and set up the next bull run.

Watch closely in coming weeks for a signal from On Balance Volume as it breaks out if its narrow range.

The correlation co-efficient is provided at the bottom of this chart in anticipation of readers pointing out that the main wave count for Ethereum differs from the main wave count for Bitcoin. These two markets do not always exhibit a strong positive correlation, despite assumptions that they should. It must be accepted that the current positive correlation could break down at any time, so from an Elliott wave perspective they must be approached separately. 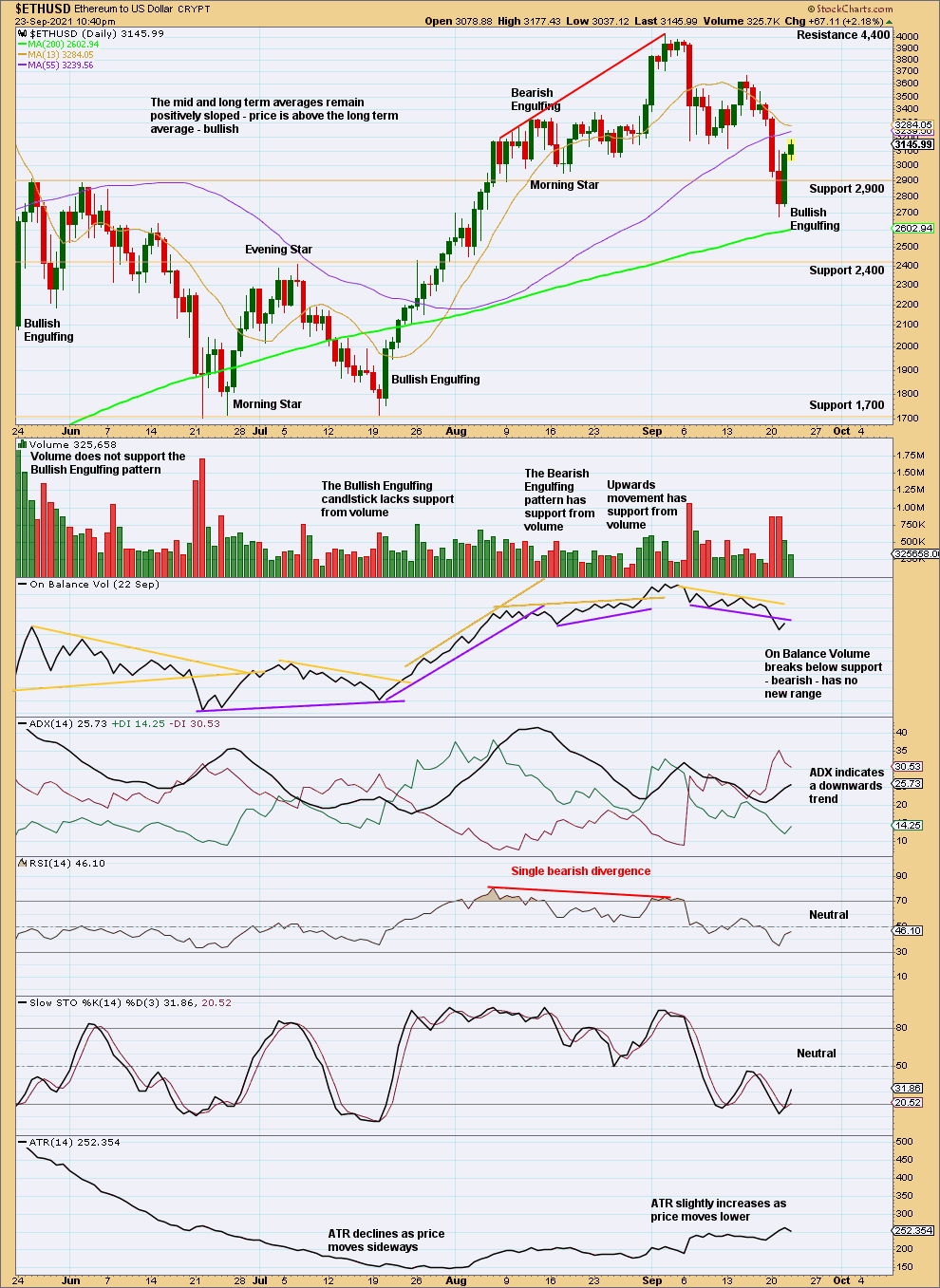 Another Bullish Engulfing pattern lacks support from volume, but this has been seen before at sustainable lows for Ethereum. The pullback may have resolved extreme conditions at the last major high.