Summary: A test of support is expected about 0.9311. Thereafter, an upwards breakout and a resumption of the larger upwards trend may occur.

The data used for this analysis comes from Yahoo Finance XRP-USD.

Weekly charts are on a semi-log scale. The close up daily chart is on an arithmetic scale. 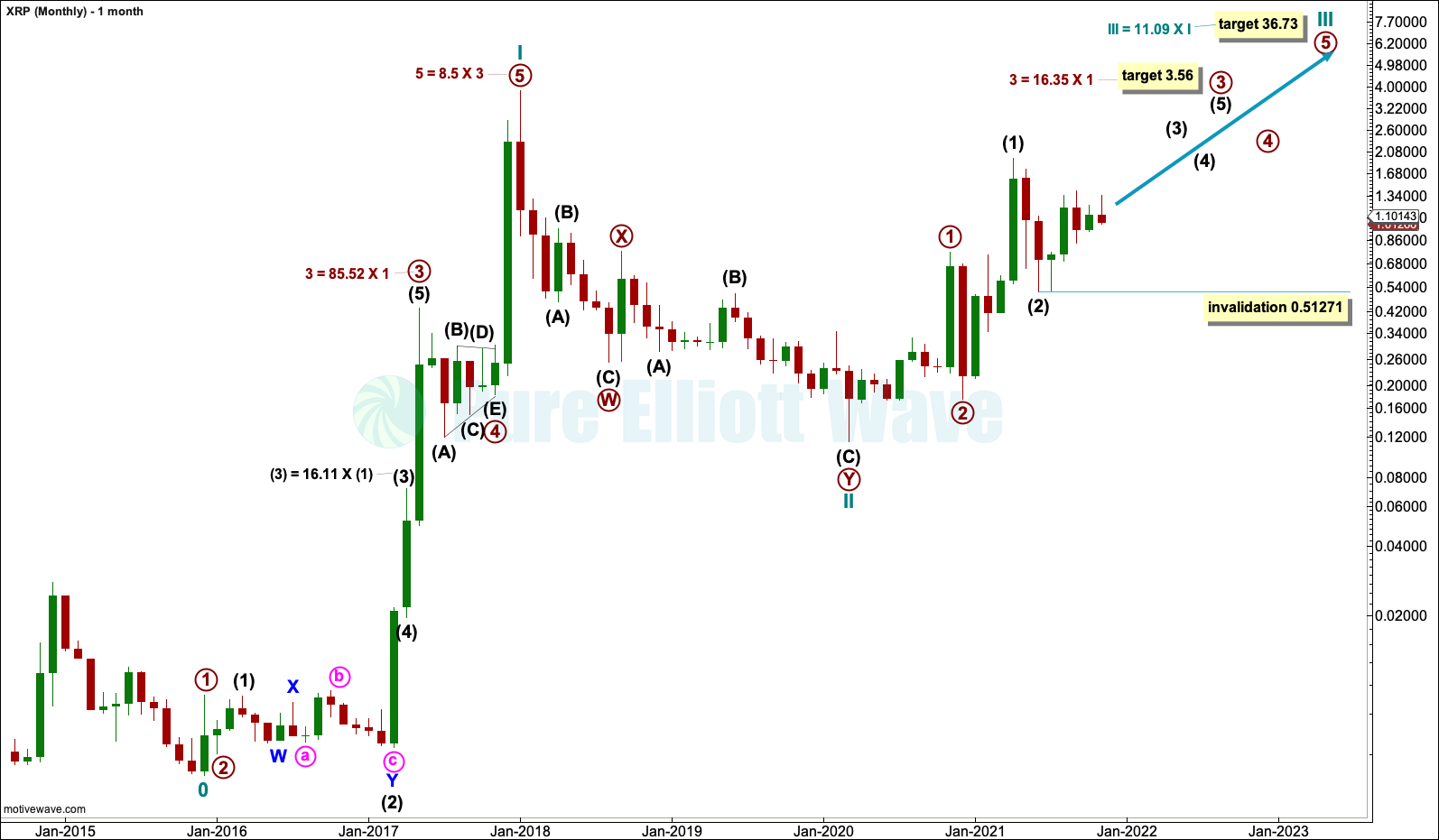 The Elliott wave count for XRP begins in December 2015. A complete Elliott five wave impulse can be seen from that low to the all time high, labelled cycle wave I, which lasted 25 months, just over 2 years. Cycle degree waves normally last from one to several years, so this degree of labelling looks correct.

Following a five up should be a three down. The three down is labelled cycle wave II and subdivides best as a double zigzag, which is a common Elliott wave structure. 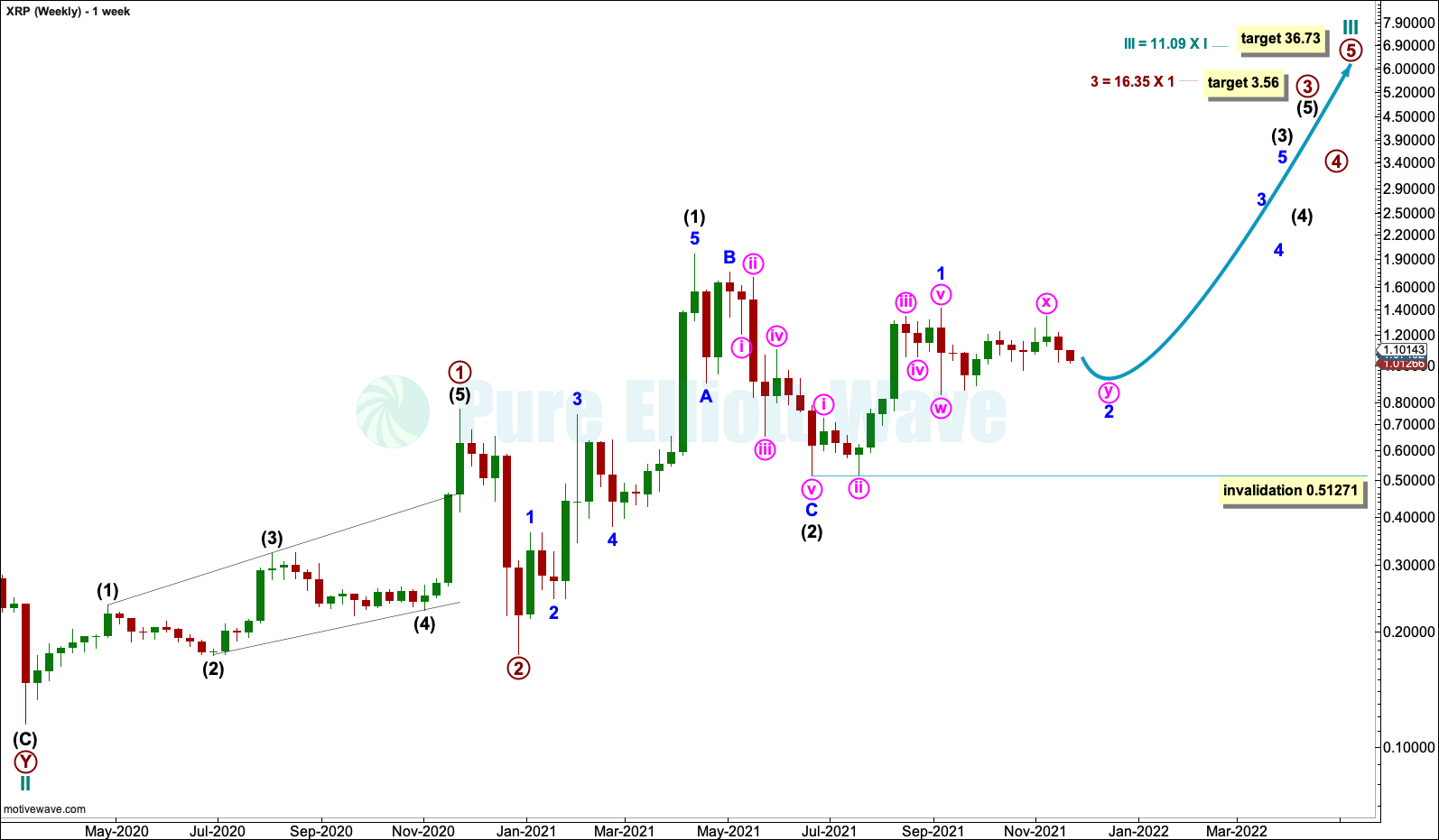 Cycle wave III may only subdivide as an impulse at primary degree. So far primary waves 1 and 2 may be complete. Primary wave 3 may have begun.

Intermediate wave (3) may only subdivide as an impulse at minor degree. So far minor wave 1 may be complete. Minor wave 2 may continue sideways as a double combination; it may not move beyond the start of minor wave 1 below 0.51271.

When minor wave 2 may be complete, then this wave count now expects a third wave up at minor, intermediate, primary and cycle degree may begin. This is a very bullish wave count. A strong increase in upwards momentum may be expected if it is correct. 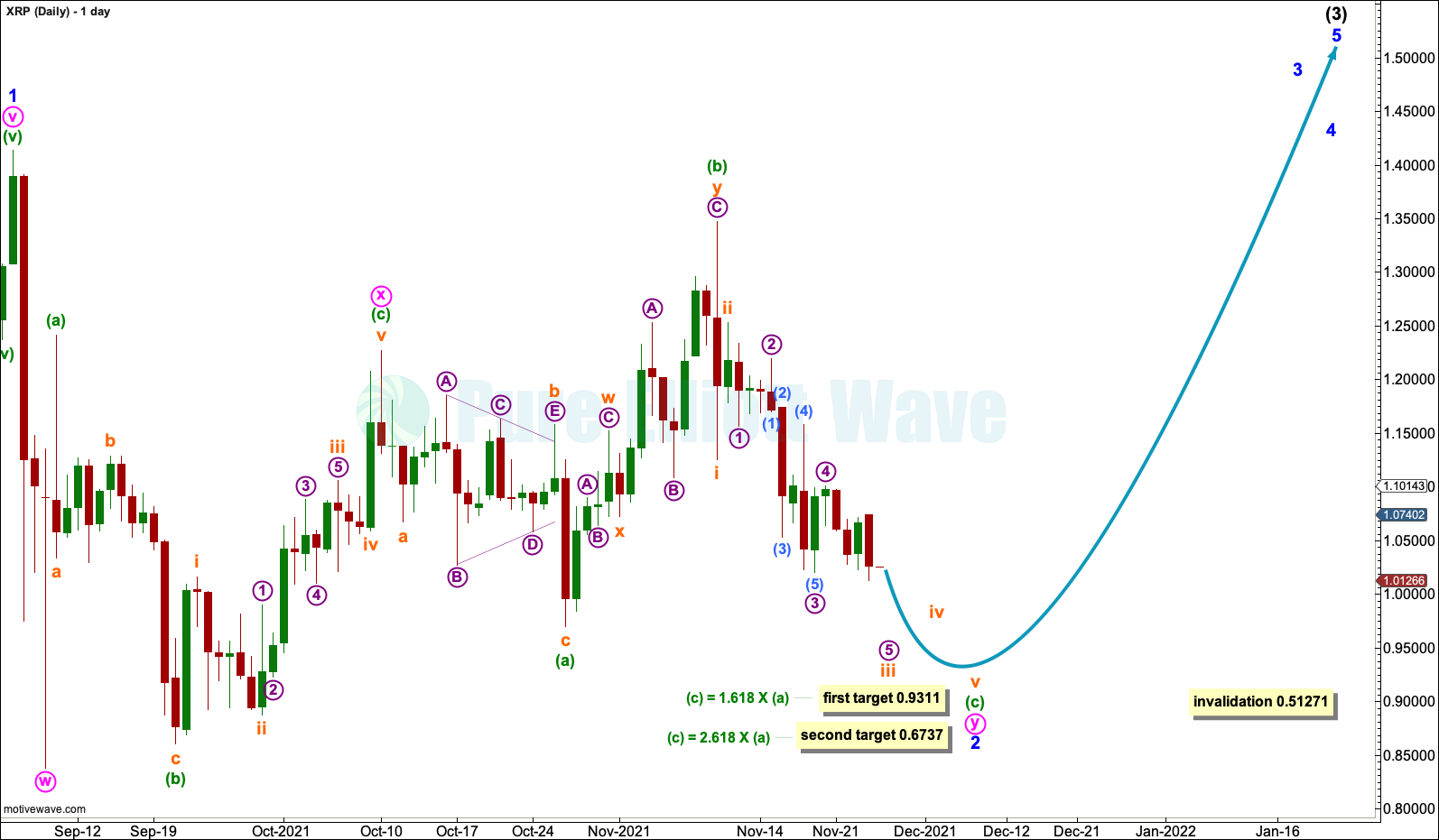 The second structure in the double may be completing. Minute wave y may be an expanded flat. This labelling has a good fit and double combinations are common structures.

When minor wave 2 is complete, then it would be longer in duration than primary wave 2 and intermediate wave (2). This proportion is not ideal, but it is within allowable limits. Within the price history of XRP during the bull run from December 2015 to January 2018, it had second wave corrections of lower degrees that lasted much longer than second wave corrections of higher degrees, so this is precedented. 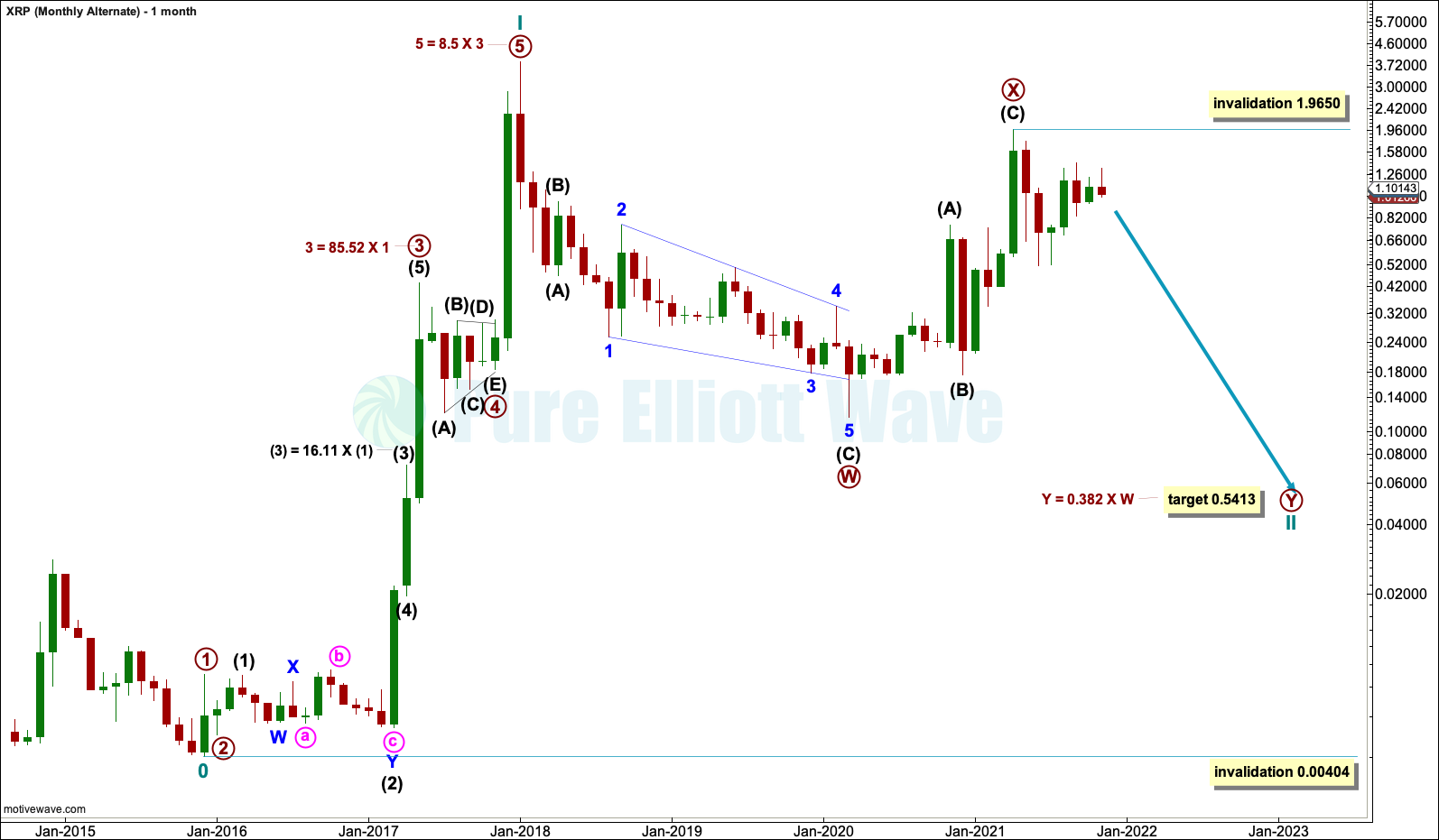 It is possible that cycle wave II may not be complete.

A target is calculated for cycle wave II to continue lower as a double zigzag. Cycle wave II may not move beyond the start of cycle wave I below 0.00404. 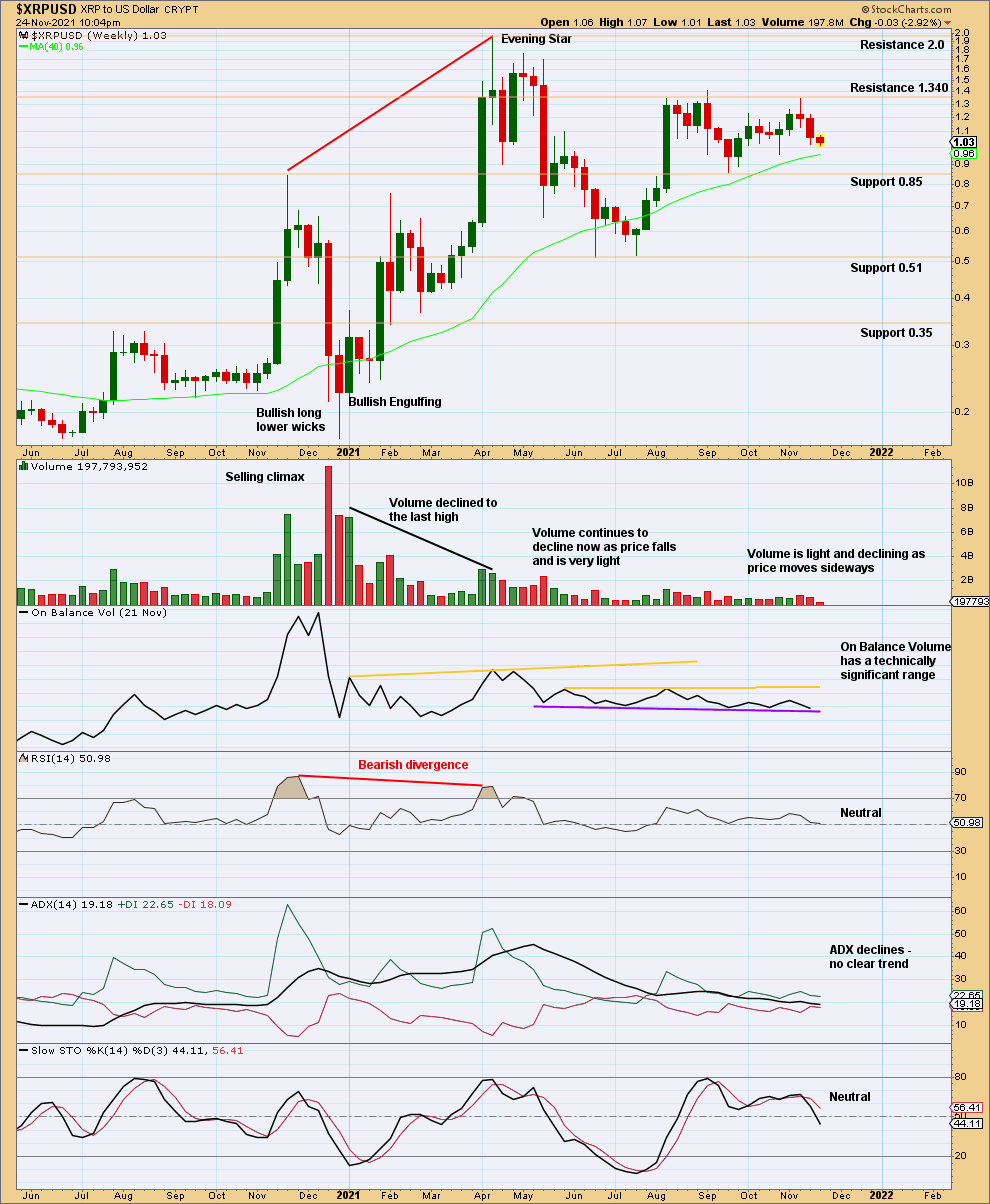 XRP is consolidating with resistance about 1.340 and support about 0.085. On Balance Volume is also within a range of resistance and support. A breakout is required for confidence in the next direction. 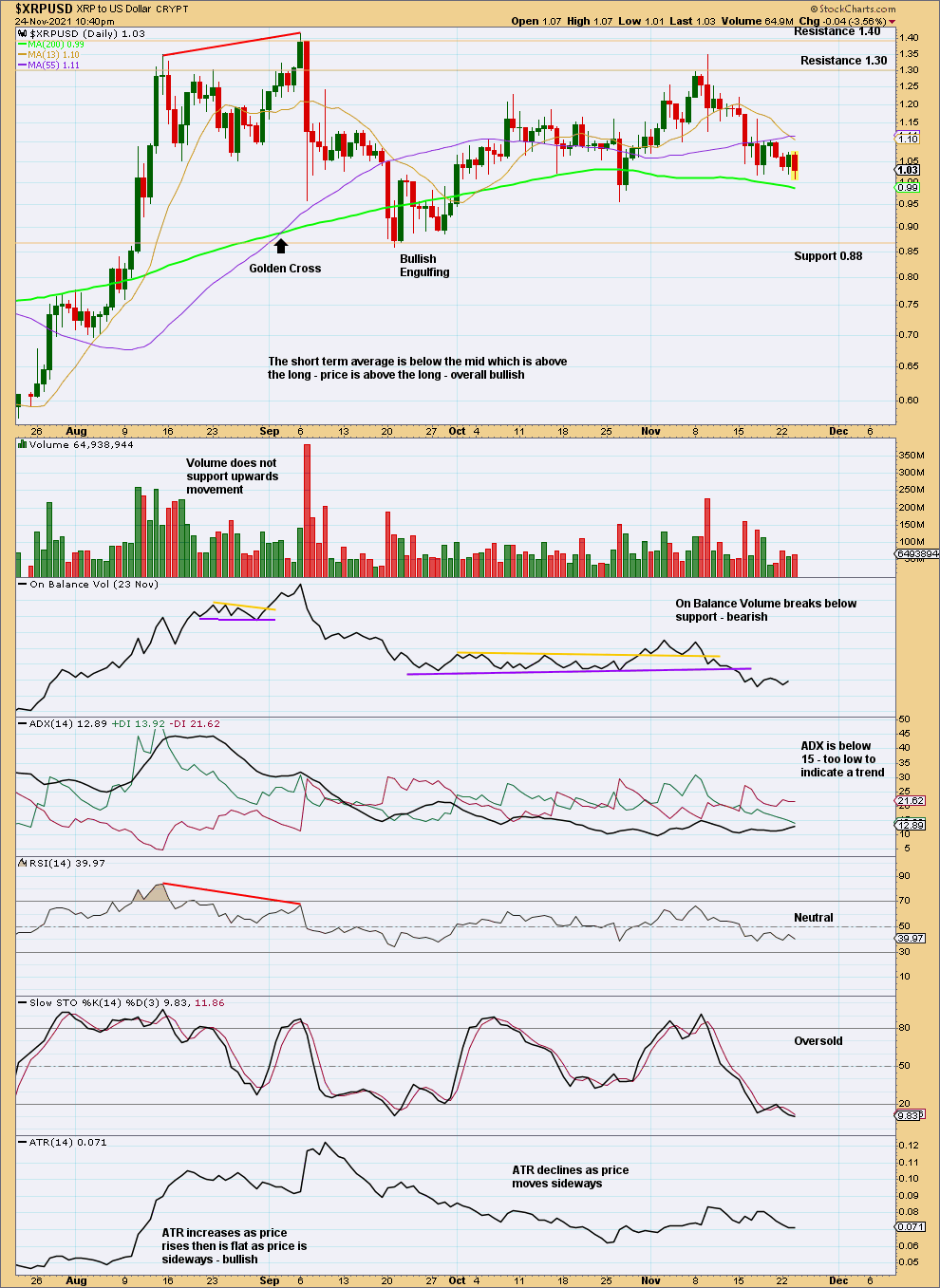 At the daily chart level, the consolidation zone looks to be with resistance about 1.30 and support about 0.88.

ADX now indicates a downwards trend. On Balance Volume gives a bearish signal. Either another test of support or a downwards breakout may reasonably be expected.

This chart suggests the lower Elliott wave target at 0.6737 may be more likely.