Last analysis of Ethereum in December 2022 expected a final new low with a target at 986 to end the bear market. An alternate wave count considered the low may be in.

There is now evidence that the low may have occurred in November 2022. An alternate wave count in this analysis is used to indicate what would be required to discard the possibility that the bear market may continue.

Summary: The next bullish run for Ethereum is now expected to most likely have begun. A possible target for primary wave 3 may be 54,226. This target is conservative and may not be high enough. If the channel about the bear market is breached by upwards movement, then that would offer confidence in the main bullish Elliott wave count.

It remains possible that the bear market may continue to find further lows. A new high above 2,030.19 would invalidate this alternate wave count.

The data used for this analysis comes from CryptoCompare. 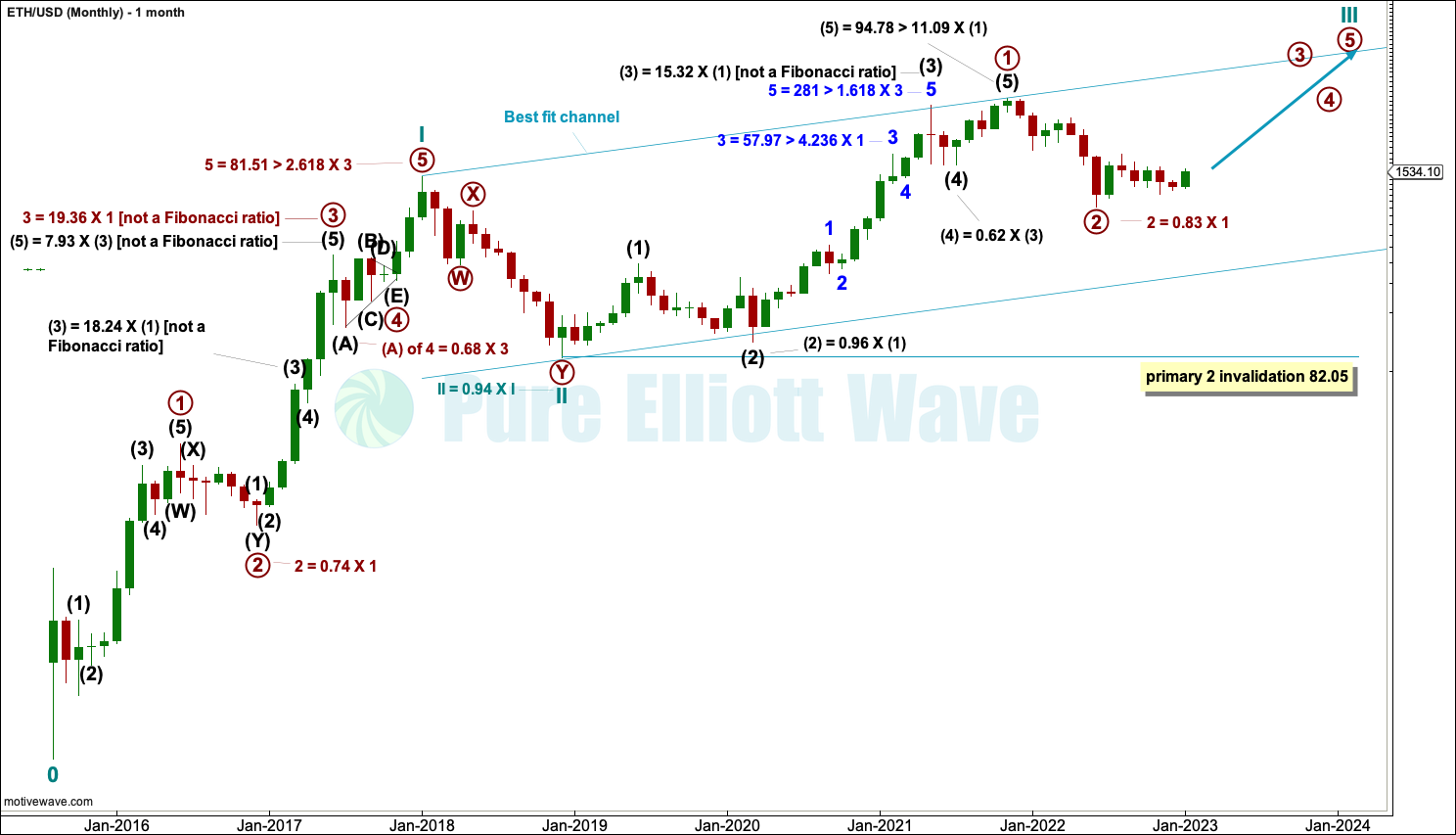 The monthly chart looks at the entire price history of Ethereum. The Elliott wave count begins at the low of October 2015. 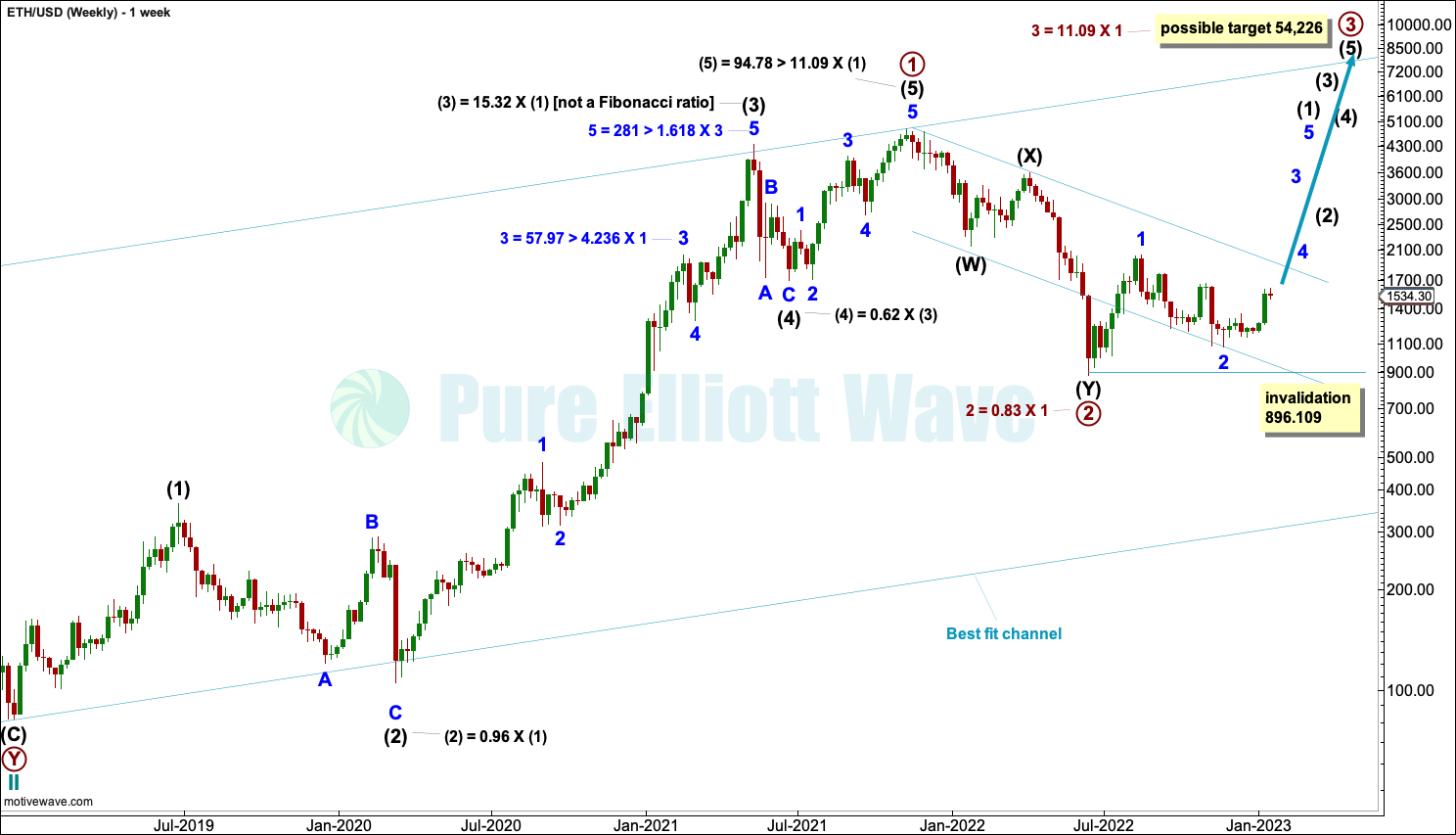 Ethereum sometimes exhibits Fibonacci ratios between its actionary waves. Within primary wave 1, the ratios are noted on the chart.

The structure of primary wave 1 may be complete. Primary wave 2 may be a complete double zigzag. Primary wave 3 within cycle wave III may be in its very early stages. This wave count is very bullish.

Within primary wave 3, intermediate wave (1) may be incomplete. 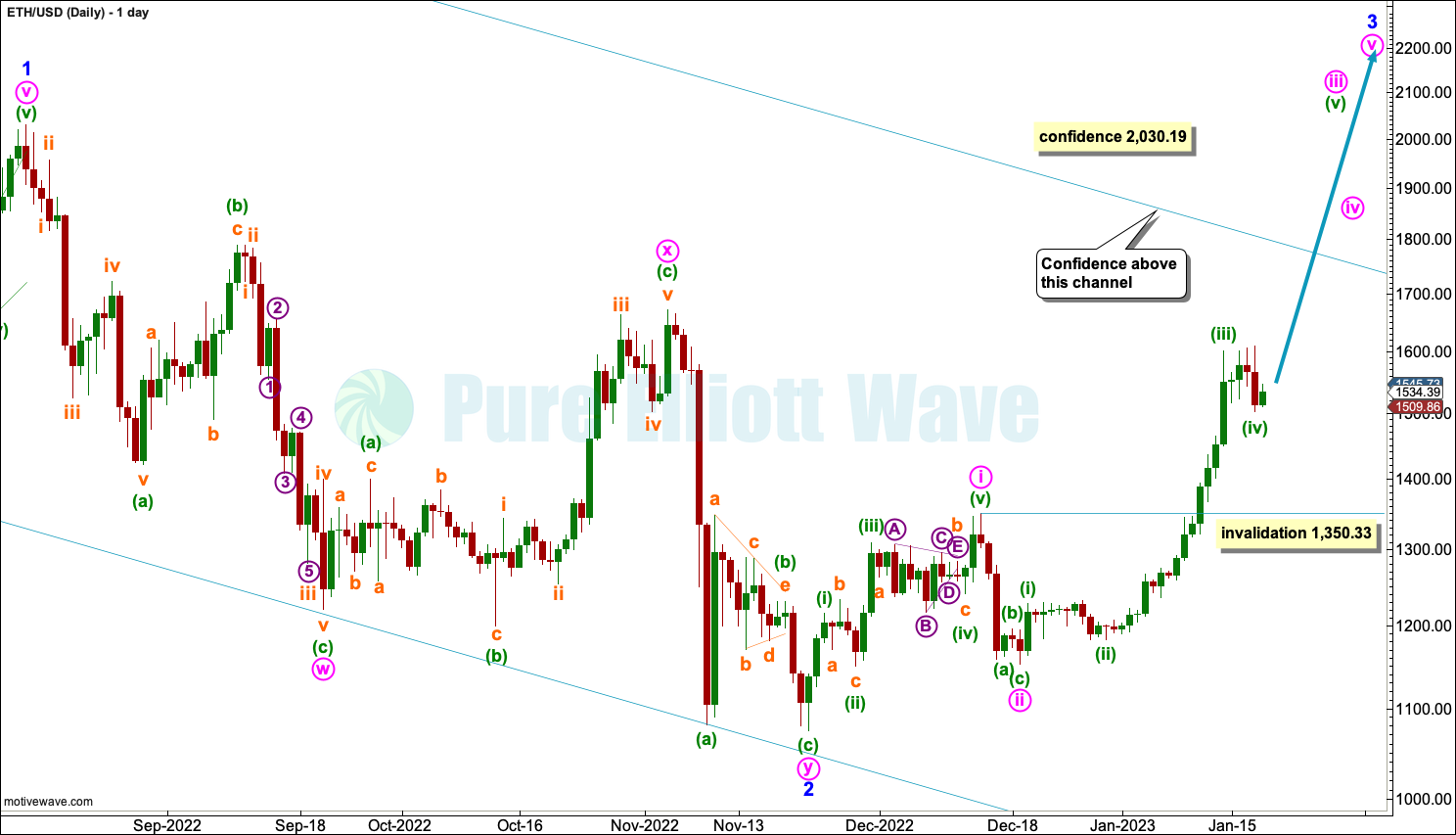 Within the early stages of intermediate wave (1): Minor waves 1 and 2 may be complete and minor wave 3 is showing an increase in momentum and has support from volume. The curved J shape of minuette wave (iii) looks like a typical impulse within a bull market and does not look very much like a bounce within an ongoing bear market.

Minor wave 3 may only subdivide as an impulse. Within the impulse, minute wave iv may not move into minute wave i price territory below 1,350.33.

If the channel containing the bear market is breached by a full daily candlestick of upwards movement, then that would provide reasonable confidence in this wave count. 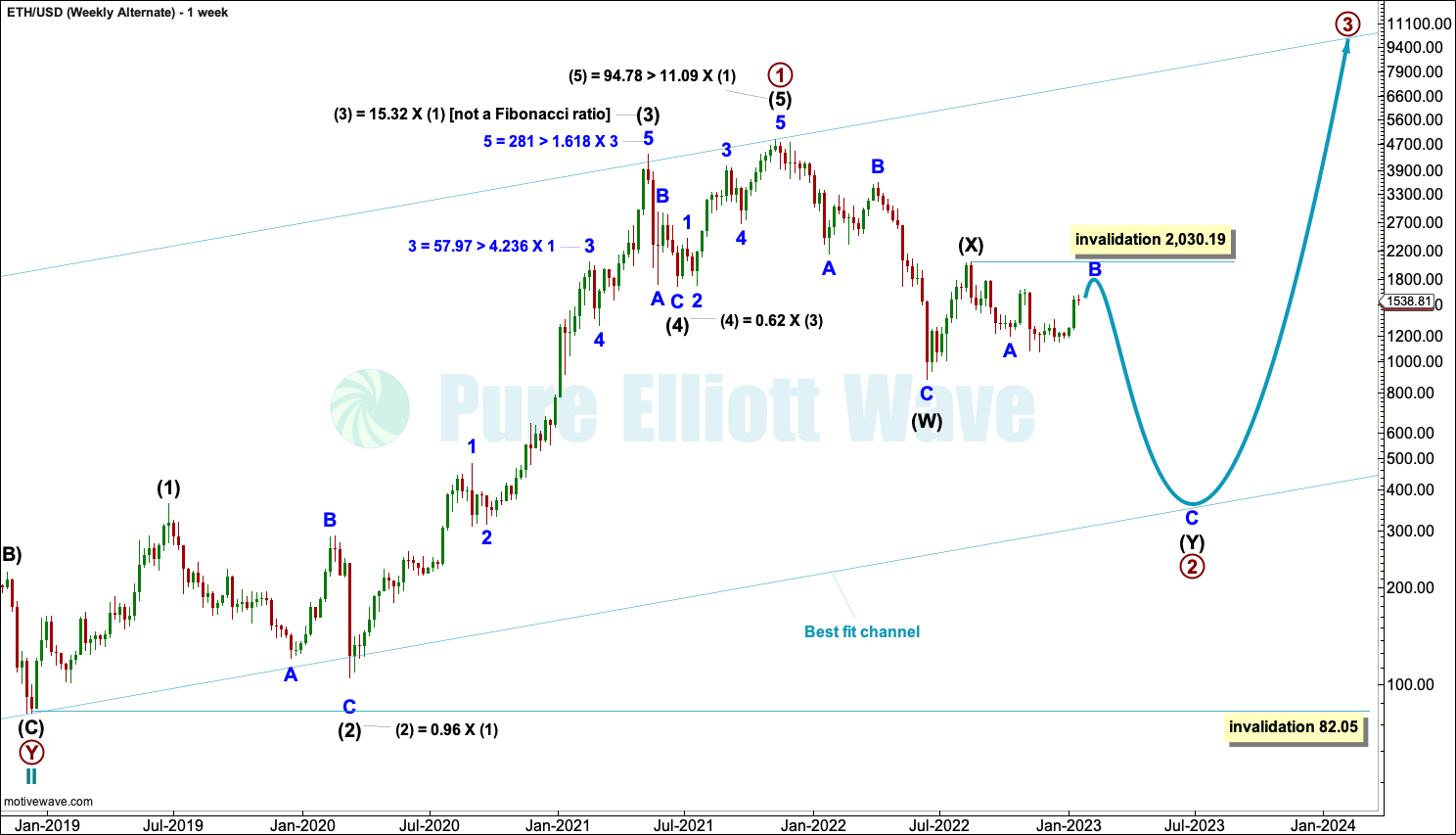 It is also possible that primary wave 2 may be an incomplete double zigzag. 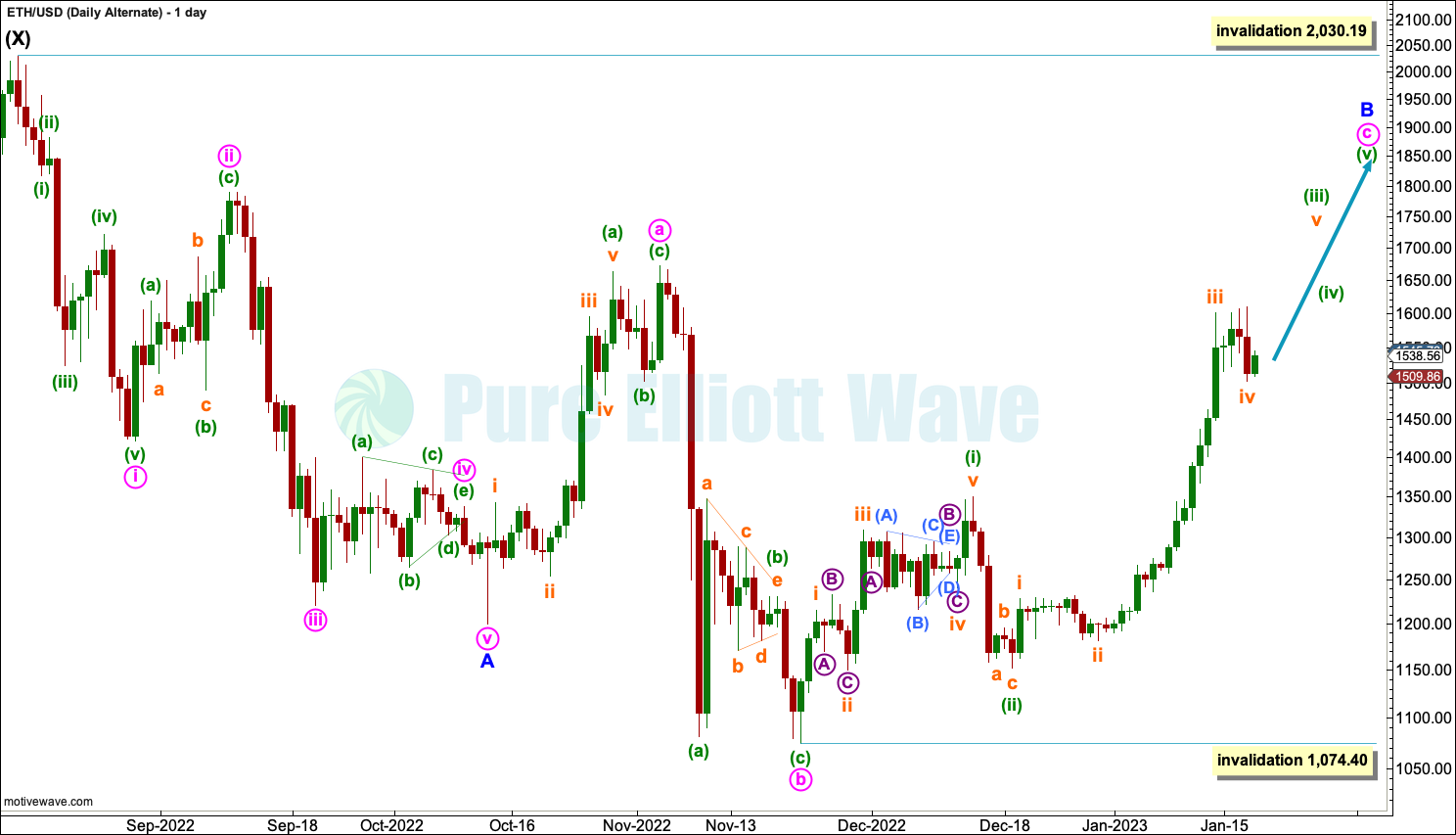 Within intermediate wave (Y): Minor wave A subdivides as an impulse and minor wave B may be an incomplete expanded flat.

Within the expanded flat, minute wave b is a 1.27 length of minute wave a. This is within the most common length for B waves within flats from 1 to 1.38 the length of wave A.

Minute wave c would be extremely likely to make a new high above the end of minute wave a at 1,671.48 to avoid a truncation and a very rare running flat. 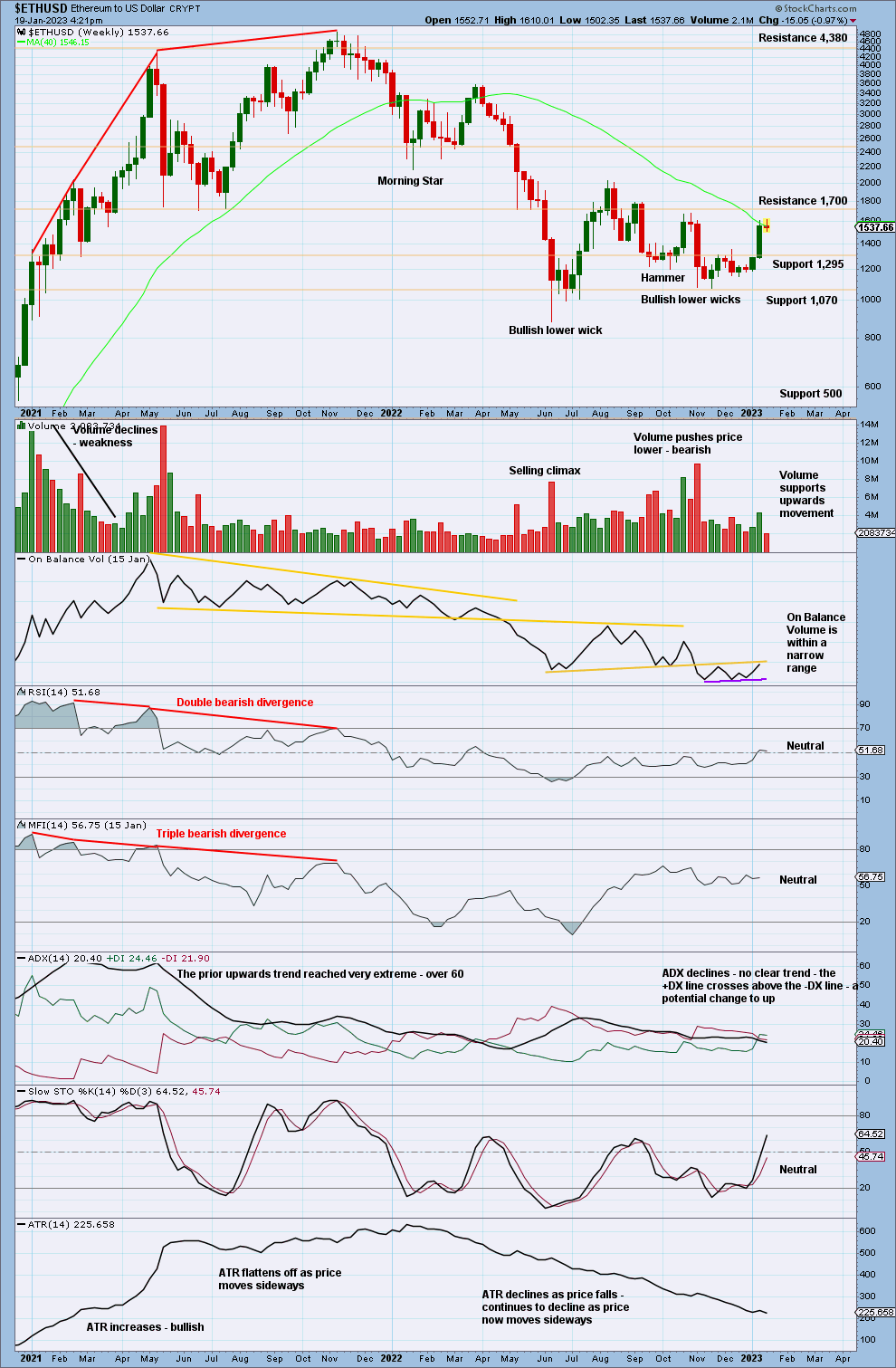 Support at 1,070 has held and price is now moving higher towards resistance about 1,700. There is currently no clear trend. It would be reasonable to expect an upwards swing to continue until Stochastics reaches overbought and price reaches resistance. 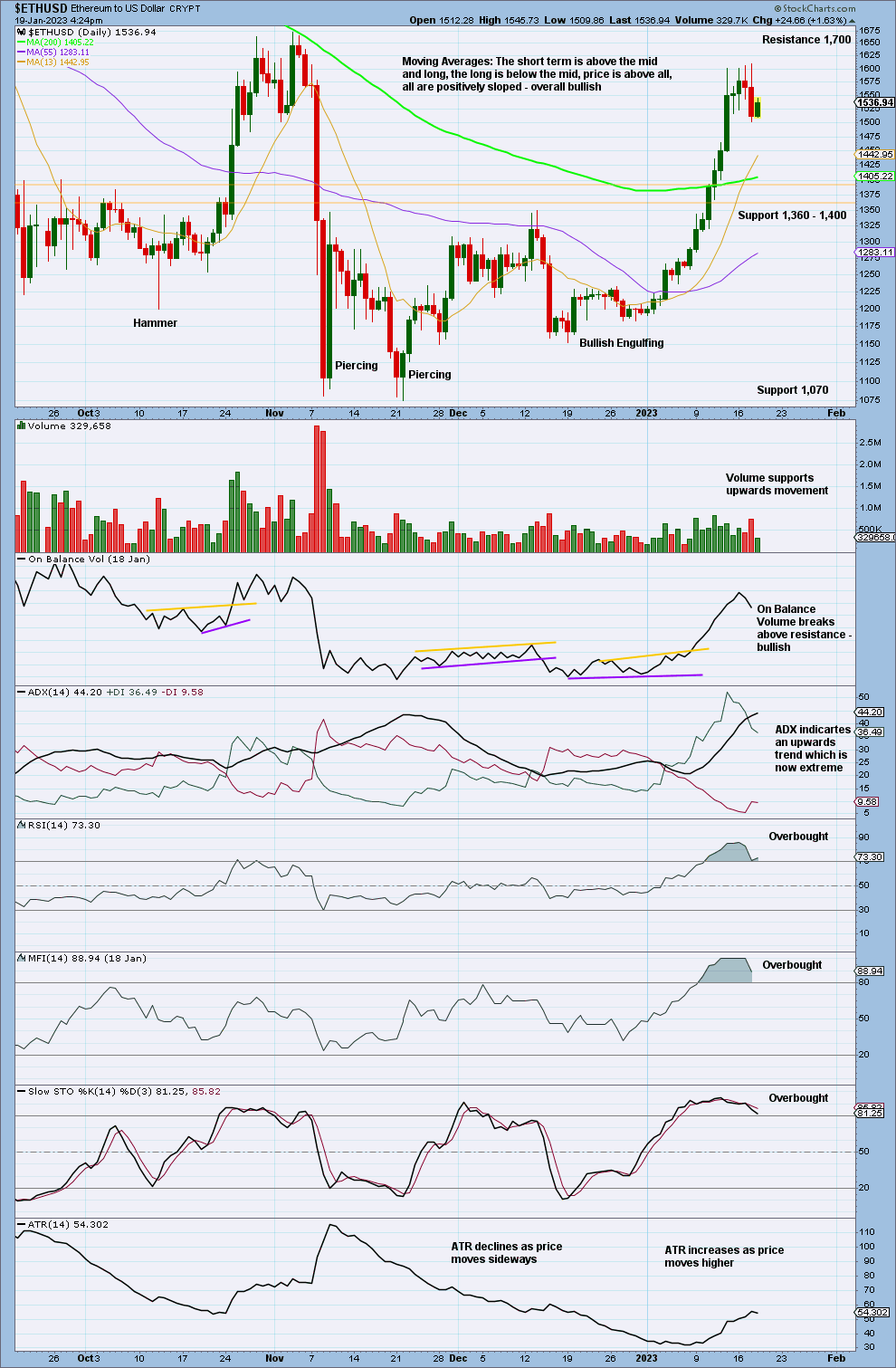 There is now an upwards trend at this time frame. The trend is extreme, but this market can see ADX reach above 60, so it may yet become more extreme before it is in danger of ending.

RSI is overbought, but this may reach deeply overbought multiple times during strong bullish runs for this market. RSI reached deeply overbought early in cycle wave I in 2016 when Ethereum was below $5, and yet the bullish run continued to the end of cycle wave I many years later over $1,400. The high in January 2018 was associated with long term bearish divergence between price and RSI.